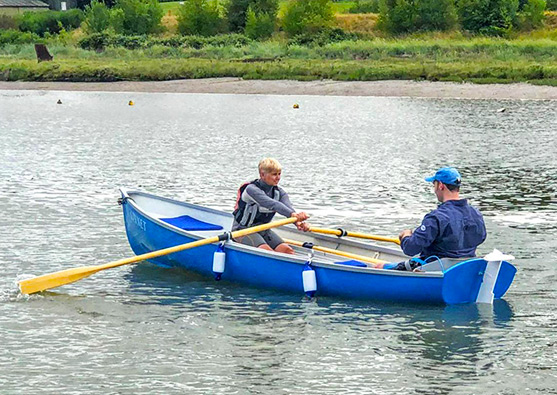 Fixed seat rowing has been present as a form of transport ever since humans first started travelling vast areas of water, from the Romans to Watermen taxing passengers across busy rivers.

Today, fixed seat coastal rowing comes in many forms with rich historical meanings to many local communities and is a rapidly growing team activity for both men and women. It is a wonderfully social sport, that is quick to learn, provides great low-impact exercise and can be enjoyed by all ages.

In June 2020, Wivenhoe Sailing Club became proud owners of “Linnet” – a handsome and seaworthy 14ft 6in. rowing skiff, which is designed to be easy to row on coastal waters. She is based on the Whitehall Skiff, a traditional American design used on the Hudson River in New York, although reputed to have originated on the River Thames in the 18th Century.  Built of GRP construction, by (and for) Brian Kennel Boatbuilders, she can be rowed with either single or doubles sculls (two oars per person), coxed or un-coxed.

“Linnet” has a distinguished history, having already competed in three 21-mile Great River Races up the Thames.

To support the use of “Linnet” by members and to provide the local community with an opportunity to discover rowing on the Colne, WSC is forming a Coastal Rowing Section.

Work is now focusing on developing procedures and guidance for making “Linnet” available in July for members to try out and ultimately book for set times over each tide. With a distance of 2.2m between the bow rowing position and the coxswain’s seat, and the provision of appropriate cleaning materials and guidance, it is hoped that this can include the ability for mixed household crews to get afloat in a socially distanced way.

Following the inspiring efforts of the Pioneer Sailing Trust’s gig-building apprenticeship scheme, community gig rowing as a sport has sprung up around our region in recent years, as new 4-person 4-oared coastal gigs have been built and launched at Harker’s Yard in Brightlingsea. There are now more than 20 gigs from 11 clubs in the region, who gather at summer regattas and winter championships to race each other in friendly, close competition.

In Wivenhoe, the launch of gig No.3 “Audacity” led to the formation of WivGigs Rowing Club in 2012, and later in 2014, gig number No. 14 “Defiance” went to the newly formed Wivenhoe “Corsairs” Community Rowing Club. In September 2019, at a meeting hosted by Wivenhoe Sailing Club, the “Harker’s Yard Gig Association” (HYGA) was formed, to develop the class and competition further for the benefit of all who enjoy rowing and racing Harker’s Yard Gigs.

The inaugural “HYGA Winter Series” followed – a 10-round championship from October to March across the region, including a round held at WSC in January 2020, co-organised with WivGigs & Corsairs, that saw over 150 rowers descend on Wivenhoe.

And then the COVID-19 pandemic arrived, and all forms of gig rowing has unfortunately had to stop. The gigs have yet to hit the water since March due to social distancing guidelines and the fact that a crew of 5 is needed to launch and row a gig, and the crew sits closer than 1m.

But the lockdown has provided an opportunity for constructive discussions between WSC and the Wivenhoe gig clubs to take place. Both gig clubs hold group memberships with WSC in order to access facilities and storage and many of their rowers are also members of WSC.

Following the arrival of the skiff “Linnet”, WSC has invited the gig clubs to help develop the new Coastal Rowing Section by joining WSC as full members, in order to help the sport grow and improve access and facilities for those who wish to discover and take part in coastal rowing from Wivenhoe.

Whilst discussions are ongoing with the gig clubs, their rowers have been invited to try out the new skiff “Linnet”, providing them with an opportunity to get out rowing again in a socially distanced way.

Any cookies that may not be particularly necessary for the website to function and is used specifically to collect user personal data via analytics, ads, other embedded contents are termed as non-necessary cookies. It is mandatory to procure user consent prior to running these cookies on your website.